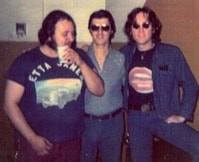 Shortly after I had finished a road stint with Lionel Hampton's band in the  spring of 1974, I got a call from my friend, trumpeter Steve Madaio, who asked if I was open for a date later in the week.   I thought he was talking about jammin' or hanging out, so I told him I was open.  Eventually I found out it was for a record date, though from his nonchalant demeanor I figured it was probably for a demo or maybe a project that he was producing, so I said "sure." We small-talked for a while, and at the end of our conversation,  I asked him for details about the session. Steve said, "Oh, it's with John Lennon.

The project was an album to be called "Walls and Bridges." John was no longer a Beatle, and this was to be his first attempt at producing an album with horns. The recording sessions were held at the Record Plant in New York City, and there were five horn players. Howard Johnson played baritone and bass sax, Bobby Keys and Frank Vicari played tenors, Steve was on trumpet, and I played alto.

After the introductions to the other musicians and Lennon, and a couple of photographs, I asked Steve if I could have a look at the alto book.  Steve looked a little uneasy, and said, "There's no music, but everything's cool." I chuckled and asked again if I could take a peek at the music, fully expecting him to hand me the book. With his eyes getting larger, and with a nervous laugh,  Steve repeated, "There's was no music."  I said, "Five horns, and no music? You're kidding, right?" Steve said, "Don't panic, it's pretty simple stuff. Just listen to me and it does get easier as you go."

I knew playing "head charts" was easy for Steve, who had toured for years with the Butterfield Blues Band, Stevie Wonder and the Rolling Stones. My background, however, was in big and small jazz bands. While it was common for small jazz groups (and rock bands) to make up unwritten arrangements, bigger bands rarely played without arrangements.  Also, most bands that I played with during that time did not live in the keys of E, A, and B. About a dozen times during the first session, I came pretty close to splitting. I kept remembering Steve's line about it getting easier as you go. 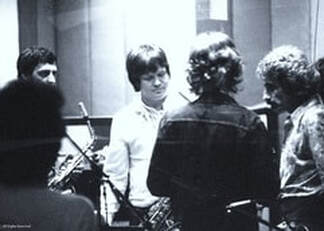 We recorded many triple sessions over a period of a couple of weeks. Steve was right; it did get easier, and Lennon had a lot to do with that.  John had tremendous respect for good musicians and was an absolute pleasure to work with. Since he had no formal training in arranging, he sat in the control room and let us make up our own parts. If he liked what we played, he would let us know, and then ask us for our opinion. He would also ask if there were any "secrets", his word for mistakes. If we thought we could play something better,  he'd tell us to go for it. At times he was like a one-man cheering section. He basically turned us loose, and then picked what he liked most from the smorgasbord of sound that we gave him. He always asked for our opinions before choosing.  He called us his "Little Bighorns."
Above photo courtesy of May Pang,from her book, Instamatic Karma

During a break, I went into a small room at Record Plant to copy some lead sheets. Lennon entered and walked over to the copy machine that I was using. Without a pause, Lennon bent over and, still wearing his eyeglasses, put his face on the glass plate on the copier, and hit the "Copy" button.  Two blinding lights later, two copies of John's smiling face, with a slightly flattened nose, came sliding out. My first thought was, this guy's gonna go blind. John then straightens up, smiles, and says, "Hang on to this (photostat) cause some day it'll be worth a lot of money." I rolled it up and stuck it in my instrument case. Given the pressure of the recording itself, the photostat seemed pretty insignificant at the time. I could not know then that it would become one of my most cherished possessions. It's been framed and hanging on my wall since 1974. I also saved copies of the lead sheets that I was duplicating when John pulled his stunt. They're pretty funny, all covered with scribbling. The music looks like a road map, complete with arrows navigating me through a maze of penciled-in notes. And it all worked!  After one our multi-track overdubs, complete with lines and counter-lines, Steve cracked, "Man, when those arrangers are sitting around listening to this shit, they're gonna say, 'Who  wrote those mother f-king charts!'"
Below are copies of the music  used during the "Walls and Bridges" recording.  The title and chord symbols are in John's handwriting. The scribbles
are Ron's notations.  This was one of the copies that Ron was making when John decided to photostat his face.  The song is "I'm Scared." 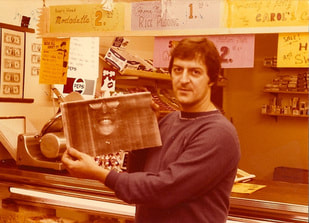 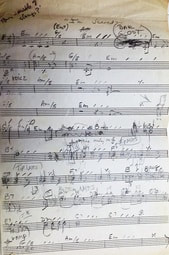 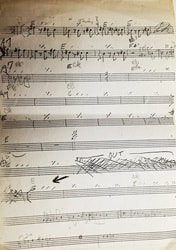 Most of the Walls and Bridges sessions ended in the middle of the night.  Since John walked to his apartment, which was in the same direction as my walk to the subway, we strolled together and engaged in light conversation.

I learned a lot about this man during those early a.m. strolls.  He was nothing like the image I had in my mind before meeting him. He was pretty shy, sensitive, and friendly to everyone. His addictions were to a good salad, and a fresh fruit drink. John would wave hello to truck drivers, and say hello to pedestrians and homeless people. On many occasions, he would stand there or actually kneel down and chat with total strangers in a most casual way. I couldn't help thinking how compassionate...but how reckless that was. He seemed oblivious to the dangers of this unprotected style.

I remember thinking, this is not the way Frank Sinatra or most celebrities do it. Frank and most people of fame had bodyguards around them,  or took other safety precautions...and with good reason. Then again, Frank grew up in Hoboken, and was pretty"street smart." I grew up in New York City, and I knew the high crime rate during those years in the early 70's.   I felt that if  if John didn't make an adjustment in his protective instincts that something bad  things could happen.

On December 8, 1980, just six years after the Walls and Bridges recording,  John's life came to an abrupt end.  While walking through the streets of NYC, the streets that he so loved, he was gunned down by Mark David Chapman,  a person who John Lennon approached and who he perceived to be an autograph seeker. It pains me to say that I was right...damn it.

Rest in peace, dear friend, and thanks for your gifts...all of them.