Ron's arrangements &/or playing can be heard on the following albums: 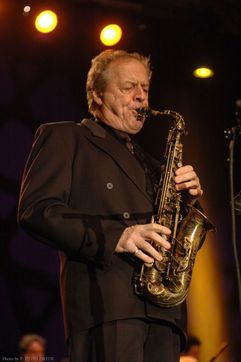 ​Ron Aprea grew up in Astoria, NY and clearly remembers seeing Pete Fountain playing the clarinet on television. Inspired to play, Ron went to his elementary school band director, Mr. Cahill, and asked to play  what he thought was Pete’s instrument, a saxophone. So that’s what the school gave him. That little mistake has given the world of Jazz an artist that contributes to the genre with exceptional skill to this day.

Continuing to play throughout his school years, Ron finally got his own alto saxophone at age 16 and started taking lessons in a studio across the street from Radio City Music Hall. It was also during this time that Ron would frequent the famed Birdland Jazz Club on Broadway. He spent a lot of time soaking up inspiration from all of the Big Band and Jazz legends that played the club – such as Count Basie and Blakey’s Jazz Messengers. Both would prove to be major influences in Ron’s career. It was at Birdland that Ron met Frank Foster, who played with and arranged for Count Basie; the two became lifelong friends. One of many prized items in Ron’s memorabilia is a collection of original arrangements that Frank had written for Basie’s band and then gave Ron copies for his band.

Ron has spent years perfecting his musical prowess. He’s played with legends like Woody Herman, Tito Puente, Billy May, Skitch Henderson and Lionel Hampton. While playing with Hamp, he had the opportunity to do a recorded performance at the Smithsonian Institute, where Ron’s solos were taped and placed into their Archives. As part of an All-Star band, Ron played at a 2001 Charlie Parker Birthday Tribute in Harlem. He has also been featured during performances at the Paramount Theatre and the world famous Apollo Theatre. Ron performed extensively in 1998, being featured during the Lionel Hampton Jazz Festival (at the University of Idaho) and as a special guest with Hamp’s Big Band, playing for thousands at the Planting Fields Arboretum in New York. He and his wife, jazz vocalist Angela DeNiro received a standing ovation at the event. 1998 was also the year Ron received 8 GRAMMY nomination entries for his production work on Angela’s “Swingin’ With Legends” album.

The collaboration with Angela proved to be successful on much more than just a personal level. Ron’s compositions, arrangements and production skills are frequently heard on Angela’s CDs. In 2001 the couple competed on BET-TV’s “Jazz Discovery” showcase and won the contest; the judges included jazz legend Chick Corea. They also co-hosted a weekly jazz radio show called “Rush Hour Rendezvous” on WSHR (New York) for two years. Keeping the music all in the family, Ron and Angela headlined les Nuits du Jazz Festival in Nantes, France and their  son Matt  joined them as a guest violinist.

Throughout his career Ron has been in demand to write, arrange, and perform on countless albums; he finally decided to release his own record in June of 2013 as a tribute to Art Blakey and his Jazz Messengers. The album is a mix of originals and standards, and when writing for the project, the straight ahead, “in your face” Blakey style of his Birdland days kept coming to Ron’s mind. Thus the title of the album, "Ron Aprea Sextet – Remembering Blakey." Two of his own original songs are included on the record; “Sophia” (written for his granddaughter) and “For Pete’s Sake” (for late bassist and close friend Pete Chivily).

Ron Aprea’s most recent project takes tribute to the next level. In 1974, Ron was invited by close friend, trumpet player (Stevie Wonder/Rolling Stones) Steve Madaio, to show up at a session in New York. It turned out to be working on John Lennon’s “Walls and Bridges” and Ron became part of the horn section known as the “Little Big Horns.” Ron loved working with the former Beatle, always enjoying his music. The two became friendly during the project and Ron has numerous fond memories from the experience (see John Lennon page.) Much later in his career, Ron was invited to perform on Ginger Broderick’s weekly television program which broadcasts from New York every Friday. Knowing that she was a Beatles fan, Ron decided to “jazz up” a couple of Lennon tunes. Ginger was so overwhelmed, Ron decided on the spot that it was time for him to put together his own treatments of some of Lennon’s songs. In 2014, Ron searched the Beatles catalog and put together a long overdue tribute to the musical genius of John Lennon & the Beatles. The resulting CD, “Ron Aprea Pays Tribute to John Lennon & the Beatles” was released in the spring of 2015 to rave reviews.